Autism Strains Yet Strengthens a Marriage

Jimmy Kilpatrick Posted on January 6, 2013 Posted in Uncategorized No Comments

Last summer, Nancy Clarke, 54, and Jay Petrow, 53, celebrated their silver wedding anniversary with family members in the backyard of their Westport, Conn., home. As Jay’s brother, I was best man at their 1987 wedding at our parents’ house in Southampton, L.I., and since then have watched as he and Nancy have taken on an extraordinary challenge — raising an autistic and seriously disabled son, William, who is now 19.

For two decades Jay worked “10 to 10” as a magazine art director, and then five years ago decided to make a new beginning, starting a landscape design company. Nancy, a Princeton graduate and former Wall Street trader, became a stay-at-home mom after William’s birth. They also have a daughter, Anna, who’s 15. Following is a condensed and edited version of our conversation about their marriage.

Booming’s “Making It Last” column profiles baby boomer couples who have been together 25 years or more. Send us your story and photos through our submission form. 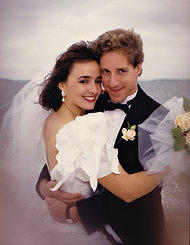 Nancy Clarke and Jay Petrow on their wedding day in 1987 in Southampton, N.Y. 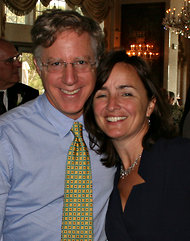 Tell me about the first kiss.

Nancy: We spent a weekend together with 10 other friends, which was the first time we met. I thought Jay was different — more approachable, someone I could be friends with. The ride back to the city took eight hours and it would have been much easier for Jay to drop me off first — I just thought he was being sweet by making me the last. As I was about to get out of the car I leaned across to give him a kiss on the cheek, but somehow the corner of my lip hit the corner of his lip and I got a jolt. It was like “Whoa!” and all of a sudden the weekend took on a different meaning.

Jay: She still tries to re-enact that kiss every time. There was definitely electricity.

A year and a half later, Jay proposed. How did that come about?

Nancy: I had been getting a little impatient and I asked him if it’s appropriate for women to ask men to marry them. He said, “Maybe, but I wouldn’t do that if I were you.” So I just let go of it.

Nancy: The night before my 29th birthday we went out to the River Café [in Brooklyn] and had a nice dinner. Afterward he got down on his knee and proposed. I was so stunned that I burst out crying.

Jay: I decided I didn’t want to live without her.

Not long after, you both quit your jobs. Were you crazy?

Nancy: We had been married for about three years when we decided to take a trip around the world — 20 countries in 14 months. This was an adventure I had always dreamed about, but I was so serious, making money, on “track.” Jay bumped me off the track.

Jay: We really wanted to see the world before the complexities and limitations of life engulf you, to step out of the normal routine of working hard, retiring and dying.

Eighteen months after you returned, William was born. Things didn’t work out according to plan, did they?

Nancy: From the start everything was so hard with William. He didn’t latch on. He didn’t sleep. I’d held a lot of babies before, but it was so hard for me to hold my own; he just didn’t koala into my own body. And then he started his head banging, out of frustration because he really couldn’t communicate at all. Sometimes at home, other times in public.

Jay: You could just hear his head hitting the wall and the floor so that —

Nancy: — it created swelling and bruising. I couldn’t bear to watch it and I couldn’t stop him from doing it. I felt humiliated and like a failure.

Jay: Just after he turned 2, our neurologist told us he wasn’t “right” and likely never would be, that we had a big job ahead of us. I’m the kind of person who usually thinks things will work out, but now I was devastated. And I certainly didn’t understand all the stresses it would put on our marriage. William always demanded so much time and attention that it was hard to find balance and passion with each other.

Nancy: I remember leaving the neurologist’s office on the Upper East Side after he had given us the news, pushing William in the stroller and just sobbing. My older sister Susan was with me and she kept saying, “It’s going to be O.K.,” and I told her, “No, it’s not going to be O.K. This can’t be fixed.”

That was a long time ago. What’s William like now?

Jay: Every night he wets himself, sometimes two or three times a night. He’s 19 and man-size now. He also continues tantrums. Three years ago we had to call the local police because he got so angry and started throwing furniture around and broke the glass on the front door.

Nancy: Last night William unplugged all the wires to the Wii, VCR, stereo and DVD player that take hours to connect.

Jay: It’s unrelenting when he becomes manic and just keeps coming at you. “Do you want to play Wii?,” sticking the remote in your face. “Where’s the train? I want the train.”